Jordan Belfort Yacht: The True Story and The Wolf of Wall Street Version

The true Jordan Belfort yacht story is as strange and unbelievable as the hit movie The Wolf of Wall Street depicts it to be. There are several insider stories behind the sinking of the mighty yacht that are not widely known but are quite interesting and different from the reel version in several ways. 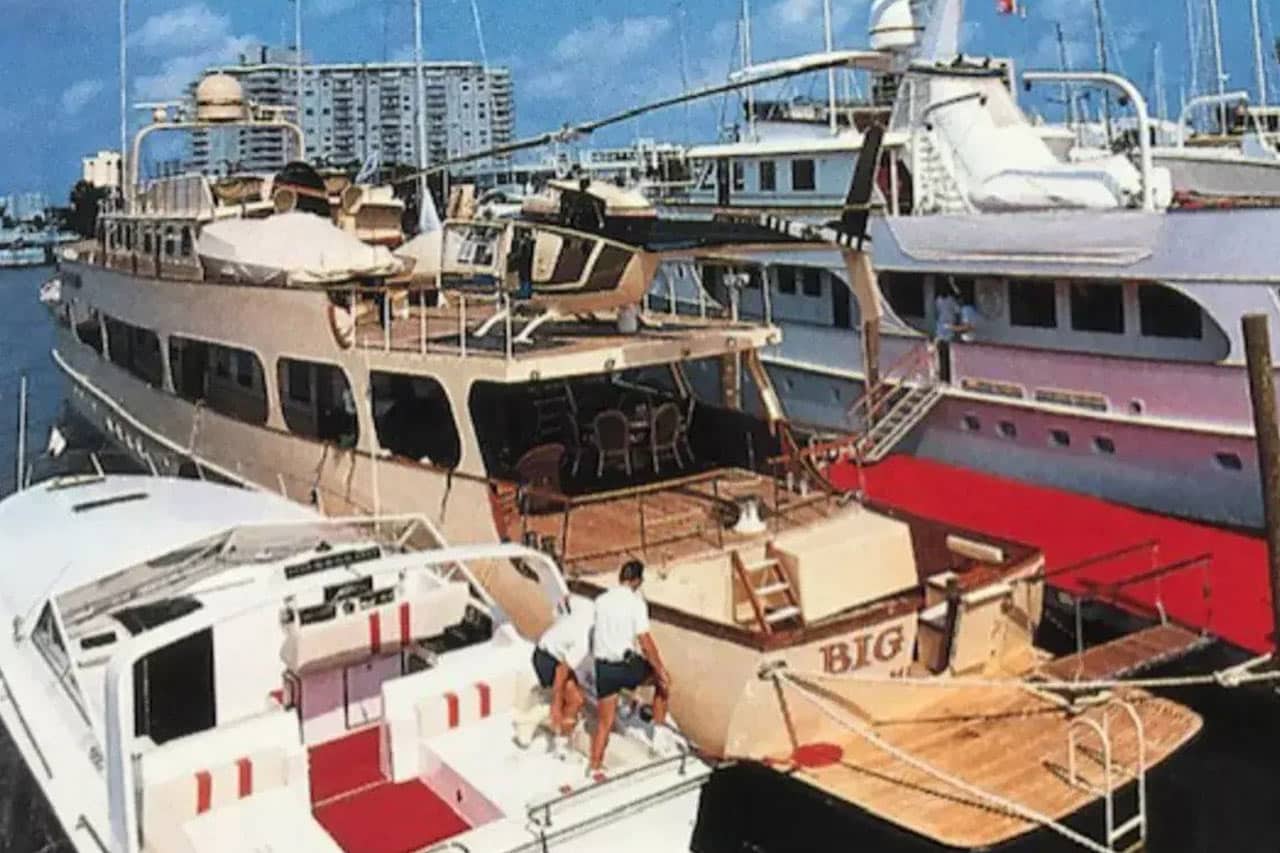 What happened to the Jordan Belfort yacht Nadine?

As the movie, The Wolf of Wall Street shows, the superyacht Nadine sank close to the coast of Sardinia in 1997 while battling what many calls “the storm of the century”. Jordan Belfort narrates the event in detail in the memoir describing his life in the 90s, which is what the Martin Scorsese movie is about.

Before getting into the details of the sinking, it is worth noting that the 37m yacht had a long and interesting history. She carried renowned celebrities like Coco Chanel before reaching Jordan Belfort (played by Leonardo DiCaprio in the movie) and was one of the largest yachts in the East Coast’s waters.

While the yacht was initially manufactured for a French native and given the name Matilda, he backed out of the deal. This led Coco Chanel to buy the beautiful yacht with the low superstructure that Dutch yachts are famous for.

The yacht took on different names as it passed through famous hands, even those of the murder trial acquitted Melvin Lane Powers. Belfort named the yacht after his wife and renovated it with the capacity to carry a helicopter, 6 Jetskis, 4 motorbikes, and much more. Under Belfort’s ownership, the yacht witnessed a series of wild parties that were like unlimited glamour and fun in a package until disaster struck unexpectedly.

Did the yacht scene in The Wolf of Wall Street actually happen?

The Jordan Belfort yacht sinking scene in The Wolf of Wall Street was heavily inspired by a real-life event, though the movie did take some creative liberties. For one, the yacht was called Naomi in the reel version since the name of Belfort’s wife (played by Margot Robbie) was changed in the movie. In reality, the yacht was named Nadine.

The movie further depicts Belfort’s helicopter getting thrown off the yacht by strong waves. In reality, the yacht’s crew went up to the deck and pushed off the helicopter so that Italian navy seals would have a space to land. The yacht’s itinerary was altered a bit by the movie’s director Martin Scorsese to add to the drama, though the power of the storm was scarily accurate.

Belfort admitted that the yacht’s captain Mark Elliot explicitly warned them not to sail to Sardinia on that fateful night. But according to the movie, there was a business opportunity in the city that Belfort could not bear to miss out on despite his wife’s protests.

Some sources claim that in reality, the passengers were simply eager to hit the golf course at Sardinia the next morning. They refused to pay heed to the captain’s warning and asked him to go through the storm, which eventually led to the famous Jordan Belfort yacht sinking incident. Therefore, unfortunately, if someone wants to have a yacht rental in Dubai or any other destination, they have missed their chance with this yacht.

Interesting insights on the sinking as portrayed in the movie

The movie captures the fear and stress that each passenger felt when the yacht got caught up in the 70-knot storm. There is some hilarity when Belfort starts yelling for his drugs to avoid the horror of dying sober.

Several rescue attempts were made, but due to rising risks, each of them was called off. By some twist of luck, the yacht’s engine room remained mostly undamaged for a while, because of which they were able to make their way through the sea.

In the end, everyone survived the incident without any major injuries. At dawn, the Nadine made its way 1000m under the water only 20 miles away from Sardinia’s coast. Now, the movie’s audience gets to watch the Jordan Belfort yacht story unfold on the screen with a pinch of humor.

The Nadine’s captain Mark Elliot’s heroic actions did not go unnoticed. He was praised for leading all the passengers to safety, though he was able to get out of the yacht only 10 minutes before it sank. The captain also admitted that the insurance was granted immediately considering the ferocity of the storm. As for the yacht, many still wonder about the highly expensive equipment that had to be thrown into the water and is probably rusting away at the bottom of the sea.

The best features of the Jordan Belfort yacht Nadine

The 167 ft Nadine, as its former passengers claim, was a beautiful yacht. When owned by Coco Chanel under the name Matilda, the yacht had five staterooms, large dining areas, and a helipad. The interiors were furnished with dark teak paneling. Each new owner customized the yacht’s name and interiors based on their tastes.

Belfort decorated the Nadine lavishly with a variety of mirrors and set a vintage deco theme. He renovated the upper deck to fit a crane that was able to stow his Turbine Seawind seaplane. The yacht carried the best dive gear available in the market plus a variety of Belfort’s ‘toys’ such as his motorbikes and jetskis.

Which model was portrayed as the Jordan Belfort yacht Nadine in the movie?

Martin Scorsese got the yacht Lady M to represent Nadine onscreen. While Nadine actually had a luxuriously vintage charm to it, Lady M is a modern vessel with contemporary features. Lady M was manufactured in 2022 by Intermarine Savannah, while Nadine was built in 1961 by Witsen & Wis. The 147 ft Lady M is currently worth $12 million and is similar to Benetti yachts in its glamorous design.

The entrepreneur and speaker Jordan Belfort’s shenanigans are well-known thanks to his detailed memoir and the hit movie based on some parts of his life. He spent 2 years in prison and now, at 59 years of age, has a practically negative net worth. Yet, his extraordinary motivational speaking skills continue to attract and inspire people even today.

It is easy for anyone watching the movie to wonder if many of the incidents are exaggerated. But considering Belfort’s eccentric life, even the Nadine sinking incident remains another regular anecdote shared in the movie. Previous PostFlying Fox Superyacht: One of the Most Luxurious and Largest Yachts in the World Next PostConor McGregor’s Lamborghini Yacht- The 'Supercar of the Sea'